French protesters, continuing their offensive despite the government’s announcement on Tuesday that it would delay increases in energy taxes, are insisting they won’t “settle for crumbs.”

Prime Minister Edouard Philippe announced a six-month delay in the fuel tax increase, which had been set to begin in January, and a freeze on electricity and natural gas prices until May.

The announcement comes just weeks after the country’s most violent riots in decades began on Nov. 17 in response to the government’s attempt to wean consumers off fossil fuels by elevating taxes. 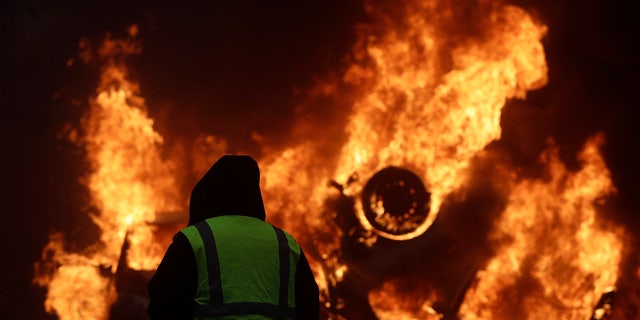 A demonstrator watches a burning car near the Champs-Elysees avenue during a demonstration Saturday in Paris.  (AP)

“No tax is worth putting the nation’s unity in danger,” Philippe said in a televised address.

But the protesters show no sign of letting up, and officials expect more demonstrations this weekend.

Just last week, more than 130 people were injured and 412 arrested in rioting in the French capital. Shops were looted and cars torched in posh neighborhoods around the famed Champs-Elysees. The Arc de Triomphe was sprayed with graffiti and vandalized.

Officials say at least four people have been killed as a result of the protests.

“It’s a first step, but we will not settle for crumbs,” Benjamin Cauchy, a self-proclaimed protest leader, said, speaking about Tuesday’s announcement of the tax hike postponement.

Another self-proclaimed leader, Thierry Paul Valette, told The Associated Press that protesters are unhappy not just about the price of fuel, but about general economic inequality.

The protests have evolved into more than just discontent over the tax hike, with many demonstrators turning their attention to President Emmanuel Macron.

Since returning from the G20 summit in Argentina, Macron has either remained in his palace residence or otherwise shied away from speaking publicly about the protests, which represent his biggest political crisis since taking office last May.

Macron, for his part, visited a regional government headquarters that was torched by protesters, but he did not speak to reporters.

Damien Abad, a lawmaker from the center-right Les Republicains party, called the tax delay “too little, too late.”

The Associated Press contributed to this report.